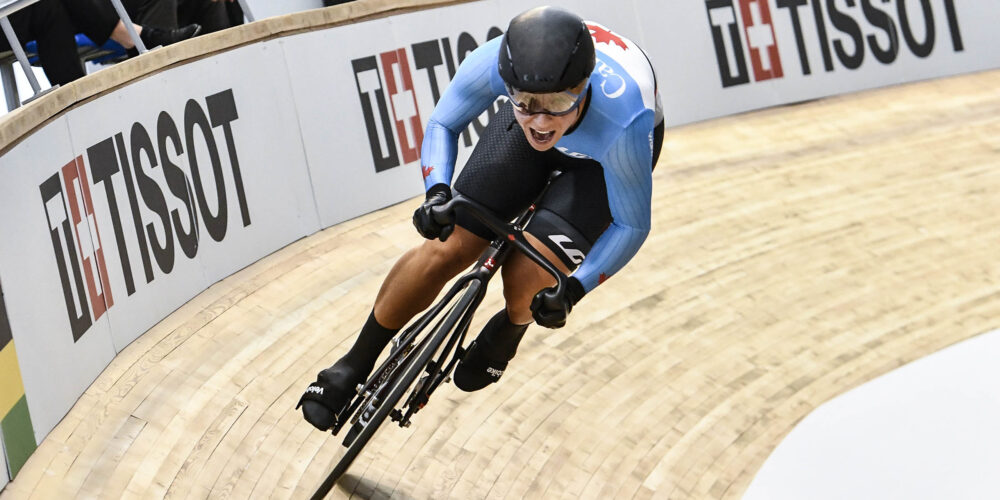 Roubaix, France (October 25, 2021) – Sixteen of Canada’s top track athletes wrapped up five days of racing at the 2021 UCI Track Cycling World Championships with standout performances, including a bronze medal in the women’s Sprint by Olympic champion Kelsey Mitchell. Overall, the team had six top-5 finishes, making this one of Canada’s most successful World Championships to date.

“From a general point of view, I think we had a great Worlds because we still have a very young team,” said Franck Durivaux, Cycling Canada’s Track Sprint Coach. “Athletes were able to get results that allowed them to do even more against the best in the world and we are going to continue to work with the development group in Milton to get them ready for the next Olympic Games campaign. That’ll be the next really important part looking towards the next season.”

Among the top results, Kelsey Mitchell placed third in the Sprint finals, beating her teammate Lauriane Genest who finished in 4th. Mitchell also placed 5th in the Keirin and 5th in the Team Sprint alongside Genest and Sarah Orban. The women’s Team Pursuit squad were coming off a gold medal win at the Cali Nations Cup and just missed the podium riding into fourth in the bronze medal final against powerhouse Great Britain. On top of this solid result, former Junior World Champion Maggie Coles-Lyster came in 4th in the women’s Scratch Race at her first Elite World Championships.

Full results from all five days of racing can be found here. Selected athletes are now gearing up for the UCI Track Champions League from November 6-December 11.