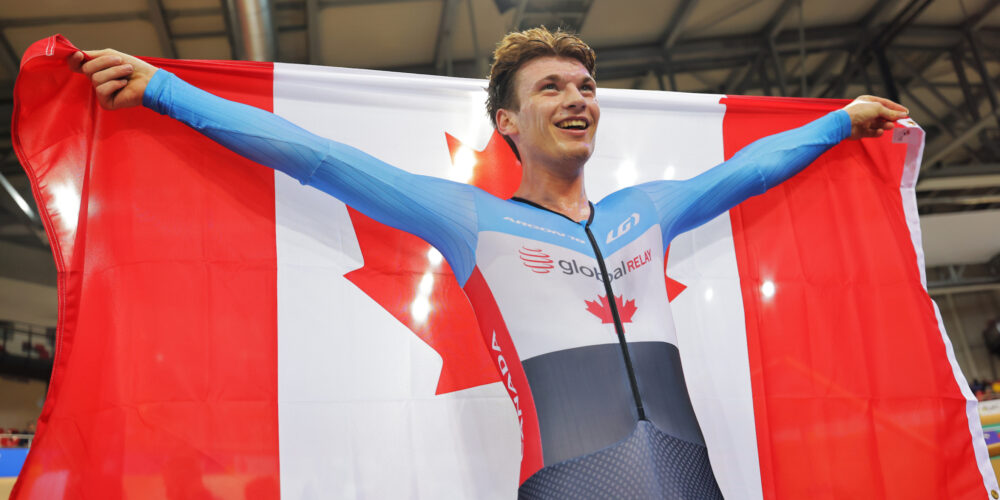 Saint-Quentin-en-Yvelines, France (October 13, 2022) – Dylan Bibic claimed the rainbow jersey in the men’s Scratch race on the second day of racing at the Track World Championships in Saint-Quentin-en-Yvelines, France. At just nineteen, the endurance rider would claim Canada’s first medal of the Championship week, while being the first Canadian in history to win gold in the event.

“It’s very exciting, I still can’t believe it I’m so proud of myself,” Bibic told the UCI in an interview after his race. “My sprint (is my strenght), I know it is comparable to sprinters, so I relied on that during the race […] My goal is to place well in the Omnium and in the Madison, which are both Olympics events, to secure a place in the upcoming Olympics.”

Bibic was part of the lead in the bunch with 10 laps to go race where he gained control on the last lap, sprinting to the line and edging out Japan’s Kazushige Kuboki and Roy Eefting from the Netherlands to secure the top of the podium. The 2022 Championship marks the first Elite Championships for the Mississauga, Ontario native making a remarkable debut which showcased his depth as an athlete. Bibic first turned heads after winning the Junior World Championship title in 2021 where he won the Points Race in Cairo, Egypt. The endurance athlete will take on Madison, Elimination and Omnium next.