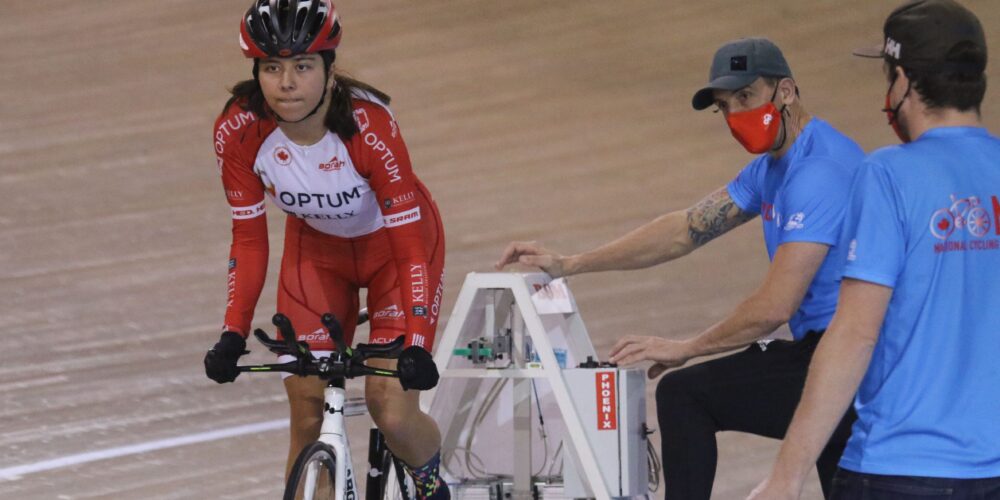 Individual Pursuit has a powerful draw as an event- it’s pure and simple as a concept. The fastest rider over a set distance wins the bike race. Despite this raw simplicity the pursuit is devilishly hard in the details- gear selection, pacing, standing starts all seem to combine to make it a challenging event to go out and execute on well. Simply put the pursuit can be a hard event to get right.

Watching a rider like Derek Gee win nationals with a 4:17 over 4km is certainly an impressive physical feat to witness- and while the huge physical toll it takes is obvious on his face as he tackles the effort, it also hides a great deal of groundwork that goes into the effort.

There is an additional challenge- the distance changes across categories! The same year Gee won Nationals (2019, pre-lockdown) Georgia Simmerling rode a similarly blazing race to narrowly defeat Annie Foreman Mackey with a time of 3:28 over three kilometers. To further complicate things the junior women and some masters categories race 2km!! These distances all come with vastly different physical demands on the rider wishing to prepare for them.

So how does this effect a rider if they are trying to train for the individual pursuit? While almost all pursuit is marked by the need to produce steady and even power over the duration of the event (or at least it should be- “start out too fast and explode all over the banking” is still a wildly popular approach to pacing). As the event gets shorter the demands on the rider’s energy system becomes increasingly heavy on their anaerobic glycolytic system and less on being purely aerobic. For a 4km pursuit rider some 85% of the energy system demand is aerobic, while only 75% of the 3km rider’s energy system use is aerobic (Characteristics of Track Cycling, Craig and Norton, 2001).

Craig and Norton didn’t model the 2km pursuit but they did look at the kilo- an event in which only 50% of the power is produced aerobically. Equally significant, while only 1% of the effort of both 3km and 4km pursuits are derived from the alactic system, this jumps up to 10% for the kilo.

The take-home here is that if you are a masters, U17 or junior rider focusing on the 2km pursuit you need to train differently than your 3 or 4km riding peers. Your event, though sharing a common name, is markedly different. Additional focus should be put into short intervals, particularly standing starts, to try and hit and maintain the velocity that is required to be competitive over the two-kilometer distance. As an added cruel twist for those of us racing masters – as we age the event gets shorter! For most of us, unless we specifically train for the demands of the event, we risk losing those competencies required for success as we age.